Georg Hvistendahls Memorial Fund has been established by NSMS in the fall of 1998. The fund is used to support participation in meetings arranged by NSMS and IMSF as well as Nordic MS meetings. Applicants need to be member of NSMS.

The application needs to be sent to the chairman of NSMS ( norsk.selskap.for.massespek@gmail.com) and should contain a budget and the amount applied for. 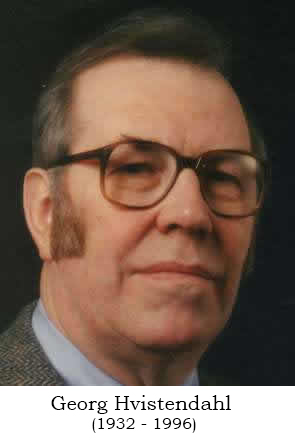 Norwegian specialist in mass spectrometry. Georg was a skilled professional, educator and respected trustee. He began studying chemistry at a mature age and took a Master in Science in 1971, with a major in chemistry. He quickly gained a solid position in his field. Therefore, immediately after graduation, he was employed by the University of Oslo as a university lecturer and associate professor. In his last years he was a professor.

His scientific and professional work was characterized by enthusiasm, diligence and accuracy. As so did his teaching. Georg spent much of his time updating and preparing his teaching and always had a positive attitude to colleagues and students. He always took the time to talk to those who sought him, whether they came to seek his competent professional advice or to strike up a chat.

After almost 25 years as a lecturer in organic mass spectrometry at both the University of Oslo and  several of the country’s other universities, he gathered his experience and knowledge in a textbook intended for the international market. He managed to complete the book and send it to the publisher before he died in 1996. Georg was one of the founders of the Norwegian Society for Mass Spectrometry in 1973, and he spent countless hours working for the Society.